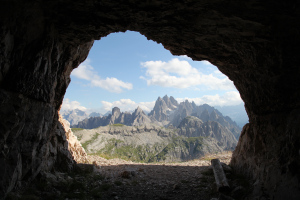 by Matthew Reza (University of Oxford)

Much has been made of the lifelong love that Dino Buzzati held for mountains, and in particular for the Dolomites which rise above Belluno, the town in the Veneto where he was born in 1906.[1] Buzzati lived and worked for the most part in Milan, but frequently returned to his beloved Dolomites, and a distinct use of the mountain in contrast to the cityscape – and the echoes of technology and modernity that an urban environment might suggest – is evident throughout his both literary and artistic corpuses. Indeed, Buzzati’s fascination for mountains reaches back to childhood: a keen climber early on, he proudly proclaimed ‘[i]o sono diventato alpinista’[2] in a letter to his friend Arturo Brambilla when he was fourteen years old.

Many critics have noted the…

University of Warwick | School of Modern Languages and Cultures

Teaching, research and public engagement in Languages, Literatures and Cultures

Musings on Daily Life in the Ancient and Early Medieval Mediterranean By Sarah E. Bond

All the medieval, all of the time

The History of Love